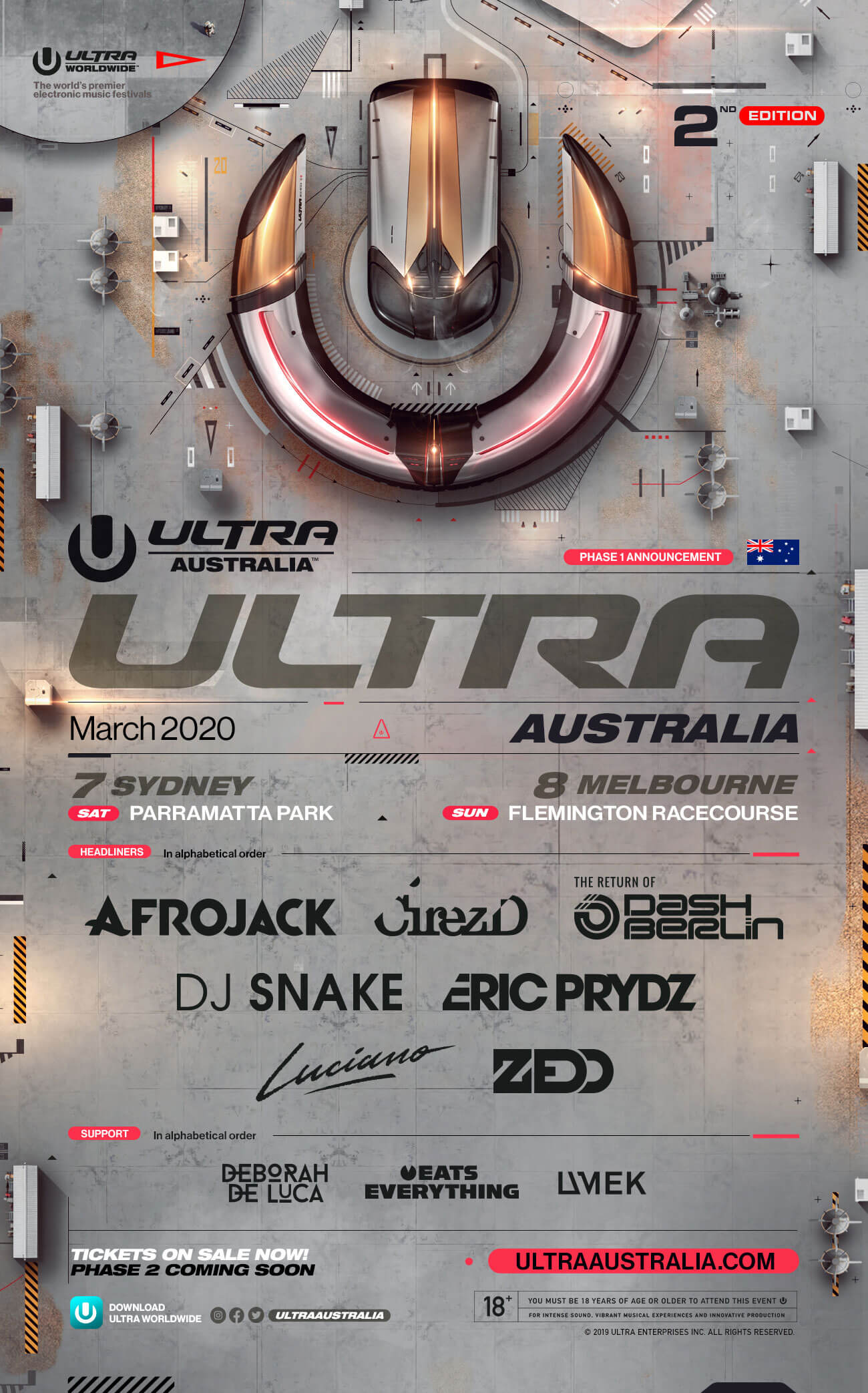 ULTRA Australia has released their highly-anticipated roster of talent, featuring a lineup of global superstars that will be hitting Sydney and Melbourne in March 2020.

Headlining the 2020 lineup will be international heavyweight DJ Snake, who will be making his ULTRA Australia debut complete with his signature stadium-smashing antics and propulsive verve. Eric Prydz, one of the most in-demand artists of our time who hasn’t played in Australia since 2017, will make a coveted headlining festival appearance.

GRAMMY award-winning artist Zedd will join the ULTRA Australia family for the first time, while multi-platinum record selling Dutch legend ​Afrojack will return to the Main Stage following his explosive Road To Ultra set in 2018.

Rounding out the Main Stage talent is former Dash Berlin front man, Jeffrey Sutorius, who will reintroduce himself to Australian trance fans under his newly formed solo act, THE RETURN OF DASH BERLIN.

In addition to his Main Stage performance, Eric Prydz will also storm the RESISTANCE stage under his techno-centric alias Cirez D, a rare showcase of the side-project that touts his darker shades of soundscapes. RESISTANCE veteran Luciano will headline the house and techno stage, following two smashing plays during last month’s record-breaking RESISTANCE Latin American tour, including a sold-out headlining show in Uruguay. Joining him will be Italian techno powerhouse Deborah De Luca in her first announced Australian date in 2020, as well as long-time RESISTANCE fan-favorite and bass purveyor Eats Everything, with Slovenian techno maven UMEK rounding off this announcement of RESISTANCE Australia talent.

ULTRA Australia will return to Parramatta Park in Sydney on Saturday, 7 March 2020 and to Flemington Racecourse in Melbourne on Sunday, 8 March 2020, on the public holiday weekend in Victoria. The festival will once again feature both the mammoth Main Stage, and the hub of underground sounds with the RESISTANCE Stage. Tickets are on sale now at ultraaustralia.com/tickets